The image on the left is how I create all of my paintings.  By starting with an underpainting in a monochromatic color scheme, in this case a toned canvas painted with raw umber, I can see if my composition is right.  An awkward composition interferes with the storyline an artist creates.  Everything must look accidental, as if the junkie just shut the door, draped the nunchucks around the door knob, and plopped himself down,  when in fact everything is on purpose.  Every piece, included in the painting, whether it is meaningful to the viewer or not, is essential for me as the artist.  A painting is an orchestra playing color.  The only difference between the orchestra and the artist is this:  The painting is a silent witness and the entire score is played at the speed of light.

The finished painting on the right has some changes as it should...that is expected and normal for me.  However, most of what was right in the underpainting is finalized in the finished image.

To purchase any of the prints or the CALVARY BOOK, click here 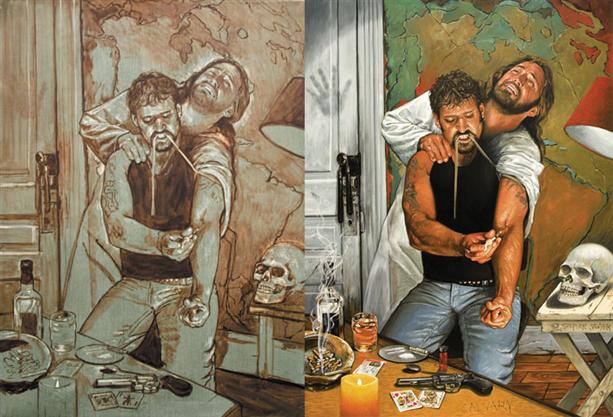 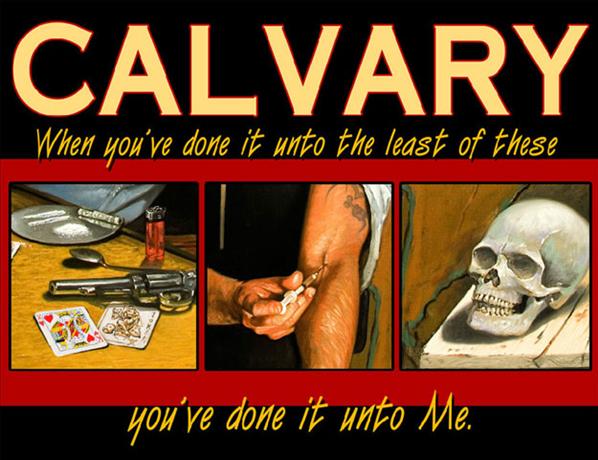 that same ‘self’ we held in such high esteem.

that so deceives us with the false freedoms we cherish above all else.

In one moment the threshold is crossed and we are lost.

who will intercede and sacrifice himself to endure our private hell.

Only God can go where all the doors are held shut by the enemy.

Only God will stay after the devil himself finally walks out on you.
Only God will share in the fullness of your sufferings and never forsake you.

And ultimately it is only the lost ‘self’ which can lose everything and eventually tell,
what they believed was a helpless God, to go to hell."